For various reasons I'm switching my issue tracker from Mantis to Redmine. Redmine supports various Source Control Management systems (SCM), for Mercurial (my favourite one) they need access to a local copy of the repository, not an issue for me, but something to keep in mind.

After you activate the Mercurial in the general settings (/settings?tab=repositories), you need to activate the Fetch commits automatically and Enable WS for repository management 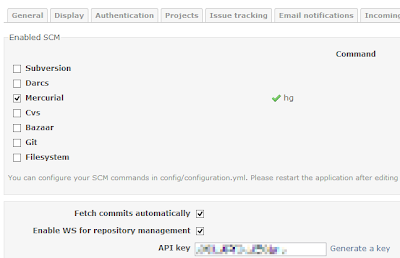 Add a new repository and specify the details (note that you will need a local path.
Now for the Rhodecode side, we need a changegroup hook, you can add a local file on the server with the following contents (for Linux):


Replace the REDMINESERVER with the actual webaddress of the Redmine server, and replace APIKEY with the key generated/shown by Redmine in the general settings page.

Make sure the local file is executable by the Rhodecode server user. Then switch to the Rhodecode Hooks page (/_admin/settings/hooks/edit), and add a changegroup.redmine hook and add the file location as the action:

In the general Redmine Repositories settings page (/settings?tab=repositories) you can specify how Redmine should detect issue references from the commit message.
I have the following settings:

Be aware that Redmine expects a # in front of the issue number, so for referencing an issue you can use : ID #3. And for closing: fixes #45.

Now if you push your commit to Rhodecode, it will be forwarded to Redmine and linked to the correct issue, and show up in the tracker for that issue. If you want to track time used for the issue you can use the @ identifier followed by the amount of time use (see Redmine documentation)

Posted by Unknown at 9:59 AM No comments:

Posted by Unknown at 8:31 PM No comments:

The Code Capture Tool 3.2 (CCT) introduces a new feature plugins. These plugins allows the user to store different info to the clipboard than the standard functions:
A plugin functions as a post-capture hook, and allows you to take the stored image and alter the text of the code stored on the clipboard.

Included with the CCT 3.2 is an imgur plugin. This plugin is available if you have LabVIEW 2010 or greater, and returns a URL to a stored image on imgur.com. Imgur keeps the images online if they are viewed at least once every half year. (Thanks to Jordan Kuehn for supplying his code)

You can add your own plugins from the help window (in the plugins page), or via the context menu on the Clipboard listbox:
This will open (after a confirmation dialog) a new VI from a template.

A plugin VI is created and opened. The plugin gets some parameters from the CCT when it's called:
A plugin can use this information to take an action with this image. The plugin should return a Clipboard text, and a Success? status. If Success? is false the end user is informed that the plugin has failed.

To customize the text in the Clipboard listbox you should edit the Title of front panel, to give the end user more information about your plugin (in the Help dialog) the VI description is used together with the VI icon:
An end user can edit your VI directly from the Help dialog, consider locking the BD using a password if you want to prevent that.

If you want to distribute your plugins to different installation, you can choose two locations:
Per default LabVIEW shares the second location between LabVIEW versions but not between users, while the first location is LabVIEW version specific, but shared between users.

If you use VIPM for creating a distributable plugin, you should use the first location (VIPM does not support LabVIEW data as a target).

There are endless options with plugins how about this inspiration list:

Markdown is a hit on the internet. It's being supported by more and more platforms, it started for me with Stackoverflow and later on my favourite project hosting website (Bitbucket) made it their default Wiki markup language.

And I like Markdown, it's syntax is quite simple, you can read the document and get a feel for it's structure (emphasize, headings, lists) without a conversion to HTML. But it had a thing missing, a LabVIEW Markdown generator.
And it bugged me.
So I created a project (a while ago) in LabVIEW, and just the last week I took the time to finish the project.
It's now a Class that overrides the LabVIEW Report Generation VIs, you can use your existing 'write to HTML/DOC/XLS' code to write a Markdown report.

It's not a full override of the Report Generation toolkit VIs, some functionality is not available in Markdown (margins) or in the toolkit's generic VIs (headings).

You can download the package from Bitbucket, and file your feature requests or bugs there as well.

Now what to do with this tool?
Well I wrote a simple VI that took some pre-written Markdown, added information about the toolkit, and pushed the information into the Bitbucket wiki. So the documentation of the toolkit is using the toolkit.
A screenshot of this VI is this:

As you can see, the only special from a normal report is that we instantiate a Markdown class that we upcast to a generic Report class. And the we use normal report functions (add text, add image) to generate valid Markdown.
Sometimes it takes some tweaking to get the result you want, adding extra linefeeds after/before an image is sometimes necessary (and can vary depending on your MD to HTML converter).

Please spread the word about Markdown, and the report toolkit, post your findings here. Add feature requests and bugs to the Bitbucket repo.

PS Markdown even got a semi-official logo [M↓]

PPS The report generation VIs are a mess. Please NI start over from scratch.
Posted by Unknown at 12:23 AM 1 comment:

As you know you can use Mantis BT and Rhodecode in conjunction to keep your issues and code connected. However this only worked if you opened up your Rhodecode repositories (either GIT or Mercurial) for everyone to read. With the latest version (0.3.1) of the Rhodecode Mantis connector you can use Rhodecode API keys to have an authenticated user get the information needed by Mantis.

Update 29-12-2012:
Version 1.5.0 of Rhodecode changes the Raw-Changeset page. For interaction with Rhodecode 1.5.x you need version 0.4.0 of the Mantis RhodeCode connector

LabVIEW has an import web services module for several versions, and it’s quite a useful tool.

After an import your WSDL specification (the web service) has been translated into a .net library, and an accompanying LabVIEW library with proxy support.

The tool is pretty good and straightforward, but lacks one little detail: support for optional input that aren’t arrays or strings.

Optional inputs in web services are sent as a NULL object via the XML data, but that’s not working for booleans, timestamps and numerics since these data types have a valid value that can be null. In the web service definition (WSDL) this is shown with the following XML:

Elements that are nullable (arrays and string) have a minOccurs value of 0, data types that aren’t nullable have a nillable=’true’ field in the definitions.

The code generated by the web service importer for these nillable datatypes isn’t working ‘out of the box’:

Since the properties are read-only we can only read the value but not update, however the Nullable class is correct, so we need to recreate these classes.

The fix is quite easy (once you’ve figured it out): 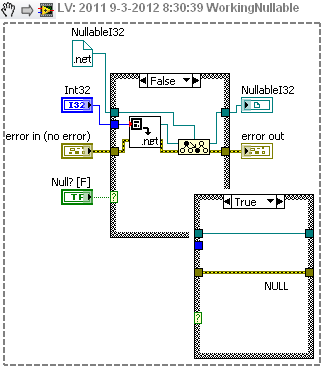 This is a snippet from a VI dedicated to generate a nullable I32. With a parameter we decide whether the object is NULL, if that’s the case we just output a constant NULL.

If the parameter isn’t optional we use the LabVIEW supplied ‘To .Net Object’ to generate a basic .NET object, that we upcast to a Nullable of the appropriate type. The output is feeded into the .Net method for getting data.

This method works the same for booleans and timestamps.

This how-to describes how I have setup Mantis and Rhodecode to communicate with each other.
Update (16-7-2011):
Version 0.3 of the Mantis plugin supports repository groups, introduced in RhodeCode 1.2
Update (03-09-2011): Adjusted hook in rhodecode from changegroup to incoming.
Adjustment (02-09-2012):
Version 0.3.1 support api-keys (more info)
Update (29-12-2012):
Version 1.5.0 of Rhodecode changes the Raw-Changeset page. For interaction with Rhodecode 1.5.x you need version 0.4.0 of the Mantis RhodeCode connector

Mantis Bug Tracker is a FOS (Free and Open Source) issue tracker widely used in the Open Source community running on PHP. John Reese has added a plugin category called Source Integration (source). This offers several integration advantages between your preferred Source Control solution (Git(hub), SVN) and Mantis.
With this integration you can connect a commit/checkin/push to a specific issue (bug, feature, task) so you can track those. Using special commit messages it’s possible to change the status of issues to resolved.

Rhodecode is a python-based local webservice for a set of Mercurial repositories built by Marcin Kuzminski. It has some nice features not found in the default Mercurial web-server:
Looking at the roadmap, Rhodecode wants to offer Git-hosting as well.
You can look at Rhodecode as a private/local Bitbucket version

The connection between Mantis and Rhodecode consist of two parts:

Prerequisite: Installed Source Integration plugins.
First part is an extension of the Source Integration plugin, you can download that from Bitbucket (version 0.2.1), extract this plugin and copy the SourceRcWeb directory into the Mantis BT plugins directory and log-in to Mantis.
When you open the Manage Plugins page (http://%yourmantisURL%/manage_plugin_page.php) you’ll see a Rhodecode plugin in the available plugins list:

Now click the Install link, and the plugins is installed.
Proceed by going to the RhodeCode plugin configuration page (http://%yourmantisURL%/plugin.php?page=SourceRcWeb/config):

This dialog allows you to set a default URL for your repositories, this can be overwritten per repository.

Prerequisite: Installed and working Rhodecode setup.
Rhodecode supports the same hooks as Mercurial, however there is currently (version 1.1.8) not an integrated Web-UI way to setup hooks.
To install the hook script (located in the root of the download) you’ll need to edit the SQLite database file used by Rhodecode (rhodecode.db by default).
I used SQLite Database browser, and edited the rhodecode_ui table and added a record with the following contents:
The used incoming file is the hook script. Make sure the script is executable by the user running Rhodecode (eg: www-data).

The Rhodecode hook uses curl to call the webinterface of Mantis, you’ll need to adjust it to math your situation.
#!/bin/sh
# Replace mantis with the URL of your actual mantis install
URL="http://mantis/plugin.php?page=Source/checkin.php"
PROJECT=${PWD##*/}
echo "Mercurial project: "$PROJECT
echo "Mercurial node: "${HG_NODE}
CURL=/usr/bin/curl
echo "Updating Changeset to Mantis Bug Tracker"
${CURL} -s -S -d "repo_name=${PROJECT}" -d "data=${HG_NODE}" ${URL}
Line 3 contains the URL of you the checkin php script, make sure this is adjusted and accessible from the Rhodecode server. If you are running version 0.16.3 of the Mantis plugin you’ll need to add an API-key to the curl command (info):
API_KEY="xxxxxxxxxx"
${CURL} -s -S -d "repo_name=${PROJECT}" -d "data=${HG_NODE}" -d "api_key=${API_KEY}" ${URL}
This hook is triggered every moment something is added to the repository and sends the information about the commit (project and commit-id) to Mantis.


Adding a repository to Mantis

Make sure the Name is exactly the name of your repository, after ‘Create Repository’ the following dialog opens.

The details from the generic configuration as well as the repository name are used to configure the repository. Per default there is no additional configuration necessary.
After this action you can use the Import Latest Data function to get all the information from Rhodecode:

After these actions you have all the information connected, you can browse in Mantis all your commits, their parents and connected issues.


Connecting a commit to an issue

My various traces on the web

I post and interact on different web-sites this should give you and idea of those areas.